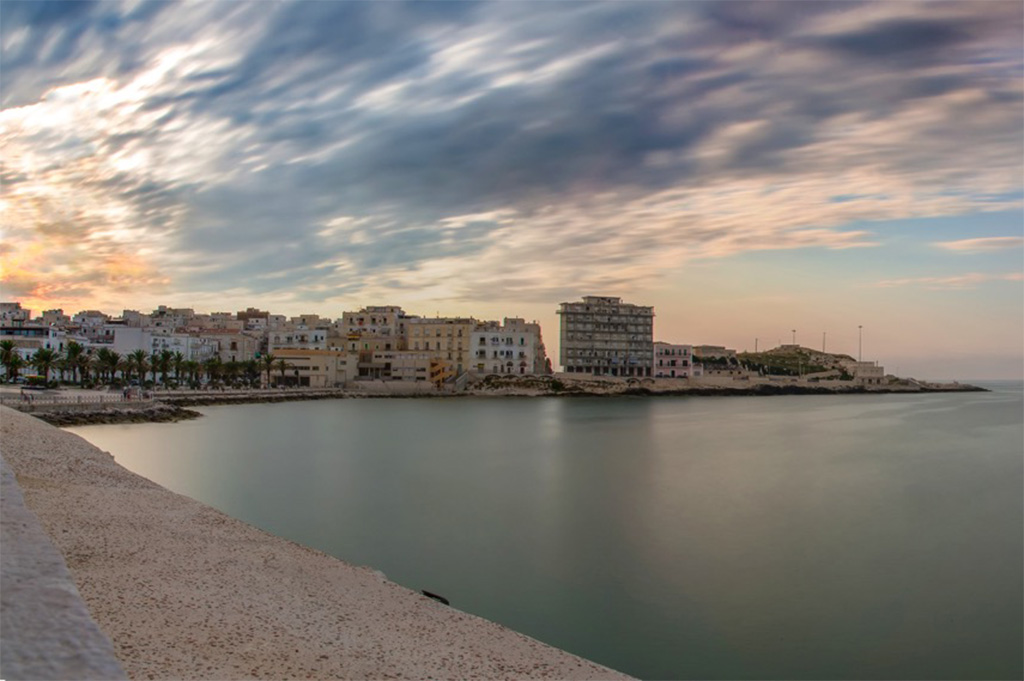 The Gargano is a fragment of the mythical land of Adria sunk in prehistoric times. Named for its shape SPERONE BOOT OF ITALY, unique mountain system of Puglia. The first men who inhabited the Gargano were the Dauni.

Recent studies confirm, however, that man lived there since ancient times. The course of history is visible to our eyes through evidence left by man over the centuries, it's like walking in a kind of time machine that allows you to linger in front of graffiti Cave clowns, the suggestion of the necropolis near Vieste Merinum , the shrine of the "Via Sacra Longobardum", the tomb of Sant'Egidio.

Nuff said, today, the Gargano is populated by people and landscapes rich respectively courtesy and natural beauty. Very important is the forest heritage, the richness of plant Foresta Umbra, with the presence of wildlife rich and rare for the south: deer, ravens, peregrine falcon etc.

Recent studies confirm, however, that man lived there since ancient times

This environment has been protected since 1991 with the establishment of the GARGANO NATIONAL PARK, setting it 'created, it' invented, but simply discovered. Let us dear readers interested in this wonderful world Gargano: places the most significant offering visitors picturesque towns full of artistic and historical religious are Manfredonia, Monte Sant'Angelo, Peschici (famous country where he won the mythical billion of lottery ; then to visit the lucky tobacconist fortunello), Rodi Garganico, Vieste (the famous limestone monolith "Pizzomunno" with the striking legend) and others.

WANT A TOUR FABULOUS? THEN FOLLOW THESE TIPS! First of all relaxing dip in the mythical sea of Gargano in one of the seaside towns like Vieste and Peschici offers. After a nice shower, take a ride in the Forest Umbra, where you will find typical trees in the forest north of the south and where you can feed a variety of animals. Rest and the next day, a nice picnic in the hinterland where you can admire religious pilgrimage centers such as the now famous San Giovanni Rotondo, with the Capuchin monastery where he lived and worked the Friar of Pietrelcina, adjacent to the abbey you can visit the church of Santa Maria degli Angeli, which houses the tomb of Padre Pio, the great Via Crucis and finally the bronze statue of the friar made by Francesco Messina.

Not happy? Then by car to San Marco in Lamis important for the convent of San Matteo Benedictine center Cistercian and Franciscan. In the church located inside the majestic monastery preserves a wooden statue of San Matteo, medieval frescoes, a wooden choir of 600 and a magnificent crib. Do you want more !!! Soon he said then ready for a trip to Monte Sant'Angelo, one of the most religious of Puglia. Popes, saints, kings, pilgrims from distant countries came to visit St. Michael the Archangel, according to tradition, appeared three times in a huge cave that declared abode leaving the imprint of a foot.

OK OK're tired and then rest because 'you can not go away without dedicating a whole day to visit the islands Tremiti San Nicola, San Domino, Caprara. On these islands, known as Diomede, legend has it that after a long and unforgettable journey will be joined Diomede returning from the Trojan War. Vegetation, sea, scenery, caves interweave while reality is mixed with dreams.

This and more is the Gargano and teaches us how a famous and old advertising: SEEING IS BELIEVING. GREETINGS FROM GARGANO!